Install it, configure some Ingress yaml files, and you have an endpoint to your service.

But how do they ACTUALLY work ?

In this post we'll focus on the Nginx Ingress, but most ingresses will follow a similar pattern.

We'll go through it step by step, digging into each piece a little deeper

The first thing we need to know is how the Ingress Controller works. Not the paradigm, but the actual Controller.

It watches for kind: Ingress objects in the Kubernetes cluster, and when one is created, updated or delete, it configures the Ingress Proxy (we'll cover this a bit later on) to match what is in the Ingress Object Definition.

You can see this in the logs when you have installed it, and created an Ingress Object.

When you update the Ingress Object and apply it, you'll see the new reload in the logs.

This is the basic workings of how the Ingress Controller works.

Now that we know how changes are realised and updated, let's move onto understanding how the Ingress receives traffic.

Traffic to the Ingress

In this section we will demystify how the Ingress actually receives traffic from the internet.

There is a common misconception that the Ingress is an additional kind: Service in Kubernetes. 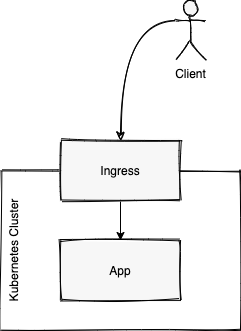 The Ingress is in fact just a Deployment running in Kubernetes.

Traffic gets to it through a Service of type: LoadBalancer or type: NodePort.

Both of these are very similar in that the type: LoadBalancer also creates a NodePort, and then connects some sort of LoadLabancer to it. 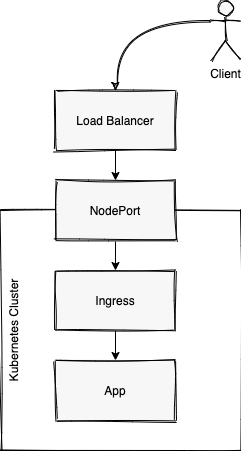 To show this you can investigate the service created by the Ingress.

On inspection, you'll see that this service points directly at the ingress controller

So you can now see that any requests to the LoadBalancer, will end up at the Ingress Controller.

This is how traffic gets to the Ingress.

Next, we can see how the Proxy works from there.

The next piece is about actually proxying traffic from the Ingress, to our application pods.

The common misconception here, is that the Ingress proxies traffic to the Service sitting in front of our application pods. 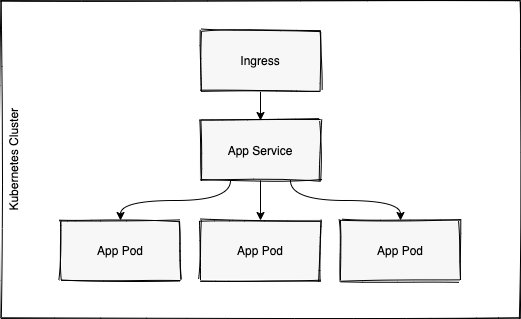 This again, is a incorrect in the case of most ingresses.

When we create a Service Object in Kubernetes, it in turn creates an Endpoint Object, containing all of the actual IP Addresses of our running pods.

You can see this by inspecting the endpoints in your cluster 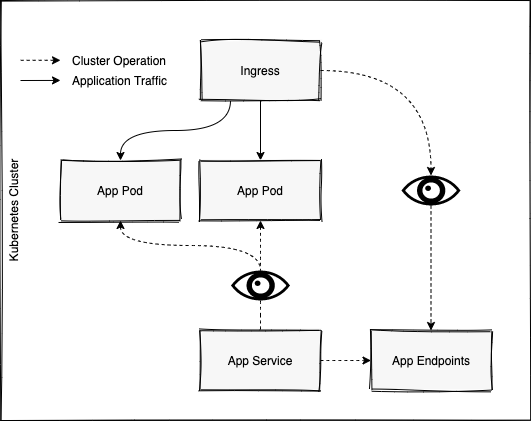 The reason for this becomes clear when you consider things like Sticky sessions (meaning a clients requests will always go to the same pod).

If the Ingress was pointing at the Kubernetes Service, it could not ensure that traffic from a client, will always be sent to the same pod.

The Kubernetes Endpoints are loaded into memory for the Nginx Ingress.

This allows you for example, to create extra LUA extensions at the Nginx level, although this is very low-level.

If you increase your application replicas, you will see the new IPs reflected here.

So far we've discussed pretty much every aspect of how an Ingress Controller works.

Different types of Ingresses will route using different tools (Nginx, HaProxy), but their architecture will look very much the same at the end of the day. 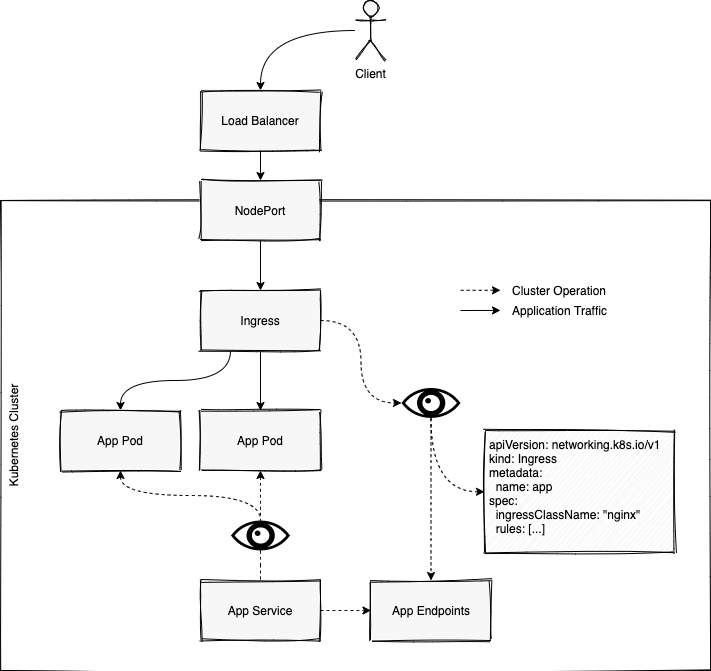 When using non-cloud infrastructure, probably on-prem, you might use NodePorts directly. This is perfectly fine, and the architecture remains largely the same. In fact, services of type: LoadBalancer also use NodePort under the hood, and just hook the LoadBalancer up to that.

You could expose your application without the need for a Ingress, by simply specifying it's Service type, as LoadBalancer.
This LoadBalancer will then directly point at your application.
One of the primary problems with this approach is if you deploy a second application, you will need more than one LoadBalancer, which would be a waste of resources and money.
Ingress Controllers help us to prevent this and allows us to create a single LoadBalancer as entrypoint for our cluster 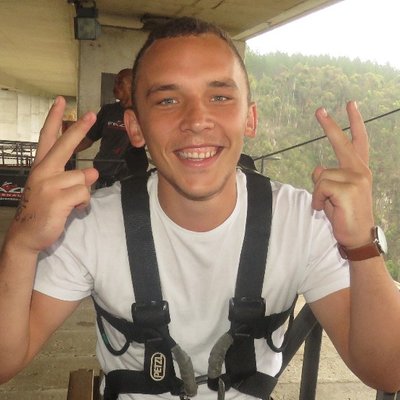 Kubernetes is a container orchestrator